We had two birthday's in December of this year and I am a firm believer in making birthdays special. Especially in December when so much focus seems to be on Christmas, (which really is a good thing)! Unfortunately, when it came time to wrap the birthday presents I realized that the only paper I had was Christmas paper! What's a girl to do? So I did what any self respecting crafty-ish (is that even a word?) mother would do. I made my own! 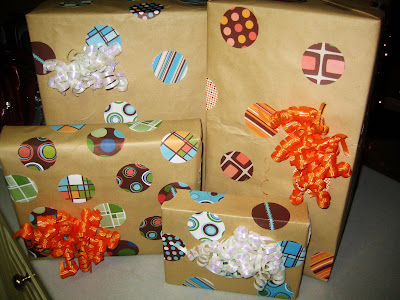 This paper was for Porter's birthday. I just started pulling out things that I had available to me and this is what I came up with. I used a large circle punch to punch out a bunch of circles in fun scrapbook paper scraps that I had lying around. I wrapped the gifts in butcher paper and then used a glue stick to randomly place the circles on the paper. To finish it off I just added a bunch of curly ribbon and voila! 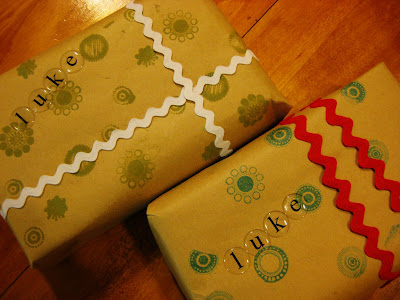 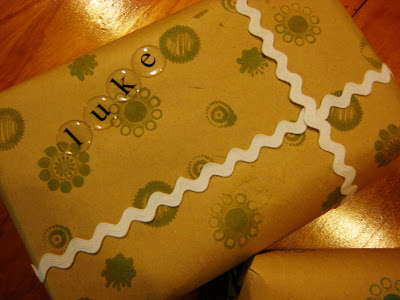 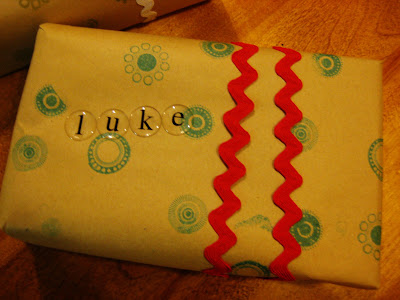 And these are from Luke's birthday. I started the same as last time by getting out my trusty butcher paper. I wanted it to look a little different this time so instead of cutting out scapbook paper I just got out a new stamp set that I had recently purchased. I picked two ink color that I liked and went to town. For a little extra something I added the ric-rac and that ended up being my favorite part. Then I just used those fun little bubble stickers for his name.

Since making my own paper for these birthdays I rarely use store bought paper. I love that these are so unique and one of a kind. I even did some for a baby shower a few weeks ago and it was adorable. I just forgot to get pictures! Just imagine reds and whites with huge pink ric-rac... Adorable!!!

And don't forget to check out my current giveaway by clicking here. Contest open until March 2nd, 2009.
Posted by Karli at 10:19 AM

Love this idea, the wrapping paper in the stores is too expensive anyway. Plus kids can create the paper, use white, etc. Endless possibilities.

Don't worry, those comments above weren't negative or anything... just repeat comments that accidentally got posted more than once!! (When I see deleted comments I always think they must have said something really mean to be deleted!)

I have been following your blog for awhile. I think you do the cutest stuff!!! Your house is adorable, your kids are the cutest, and you make awesome stuff! I love reading your blog!

Good grief Karli, can it get any funner than this? You are amazing! And so cute too - you little cutie pie.

Karli,
This is such a cute idea! Since I have a birthday in January, I appreciate the fact that you make sure not to wrap your kids presents in Christmas wrap. I always got that when I was growing up and I always hated it! It made my birthday feel like an after thought! Good for you for being such a good mom!

Plain brown is my fav, but a little style is nice too...