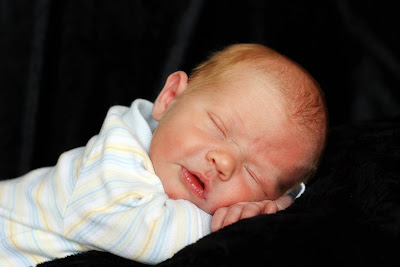 It was a super fast labor and delivery and it was all wonderful!

Labor started at 8:30 p.m. with contractions anywhere from 2-5 minutes apart and not too painful. I've been induced with all my other boys so I wasn't sure this was the real thing and I REALLY didn't want to go in to the hospital and be sent home. Mike and I watched a movie and timed contractions for a little while and they eventually got to the point where I figured we should call my mom to come stay with the boys and we should head in. We called her at 12:00 a.m. and she was here within 10 minutes. By this time I was pretty sure they wouldn't be sending me home but I was still apprehensive. We called Jana (my sister and labor coach) to tell her we were headed in to the hospital and told her we would call her again once we got there and found out where things were at. We live only a few minutes away from the hospital so we got there at 12:15 a.m. and they had me put the gown on for a check. At this point I was just hoping that they would say I was at least a 2! Up until my appointment two days earlier I wasn't dilated at all and the baby was still high. It took her a while to check me and I started thinking, "Oh great! I'm not dilated at all and she's going to send me home!" When she was finished, she turned to me and I was shocked when she said, "Well, it looks like you are dilated to an 8. I'll go call the doctor." I was sooooo happy. I mean, I was in pain and it hurt but to hear I was at an 8 was awesome. I knew it wouldn't be much longer so I was worried that Jana might not make it. The nurse went to call the doctor, came back and offered me some Nitrous Oxide to use until the doctor go there. At that point she informed me that I was too far for an epidural and that made me a little nervous but I was just glad it would be over soon. At that point Jana came in the room. I guess she decided to come right in because she said she couldn't go back to sleep anyway. I was glad she did because otherwise I'm not sure she would have made it. She had just gotten back from Vancouver that evening at about 8:30 p.m. (right when labor started, I guess Cohen really wanted her there) and I would have been bummed if she couldn't be there after all.

I labored for a little while longer and pretty soon they wheeled me into the delivery room. At this point I was in a lot of pain (duh! it's called labor for a reason) and I was really ready to be done. :) Luckily the pushing went quickly and as soon as the baby dropped, one more push and there he was! He looked so tiny and adorable. I thought he looked a lot like Luke as soon as I saw him but Mike sees more of Walker in him.

I have to say, the hospital and staff here were awesome! They immediatly put him up on my tummy and let me hold him and look at him before they took him away and cut his cord etc... The delivery room was so calm and peaceful and it was just awesome. I was so lucky to have both Mike and Jana there to help with things. Jana helped coach me through breathing and pushing and Mike gave awesome encouragement and kept me calm.

With all my other babies I had an epidural and I have to say there are definitely benefits to natural and epidural. I'm really lucky that I have fast labors and if I had to labor for hours and hours like a lot of women I would want the epidural for sure. I didn't mind the drug-free labor and again, I am lucky it was so fast but would I do it again? I'm not sure. :) The epidural is so nice for that last little bit but I loved being able to walk immediatly afterwards and I felt like my recovery has been a lot faster without the after effects of an epidural.

Cohen has been a joy to have around. I think he's adorable. He makes his older brothers laugh a lot and he's a really great sleeper - during the day anyway. :) But I have nothing to complain about. I am healthy, he is healthy and we are home and doing great!
Posted by Karli at 10:33 PM 12 comments: Links to this post