I gave the boys some markers and paper the other day so they could draw some pictures and practice their letters while I got dinner going. They were having a grand old time and I discovered that Walker can write most of his letters. Very neatly, I might add! I didn't even know he could do this since every time me or Mike tries to help him or teach him something he adamantly refuses and runs off to play dress up. I'm proud of the little guy.
I'm proud of Porter too. Cause without him we would still be suffering mass confusion every night when we sit down to eat, not sure who's chair is who's. Because sitting in the same seats for three meals a day, every. single. day. can apparently still be confusing. Who knew? 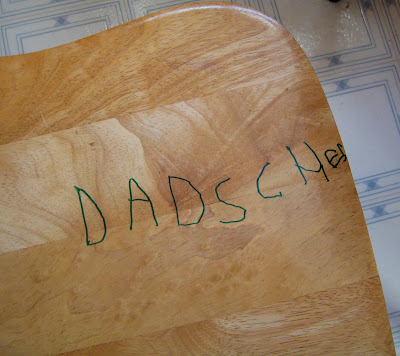 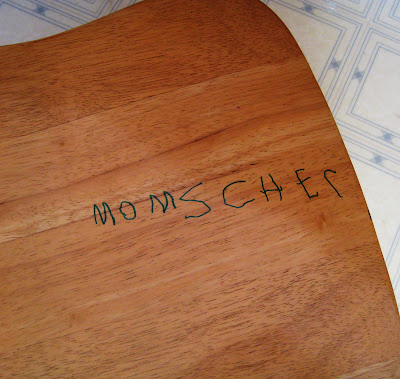 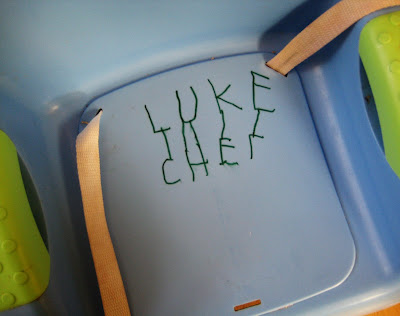 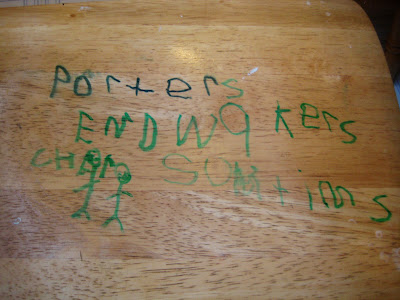 I suppose this one could be confusing since Porter and Walker share chairs. I guess that's why it's "Porters end Wakers cher somtims" Hey, I'm just happy he used a lower case 'e' on his name. We've been working on that one for a while! 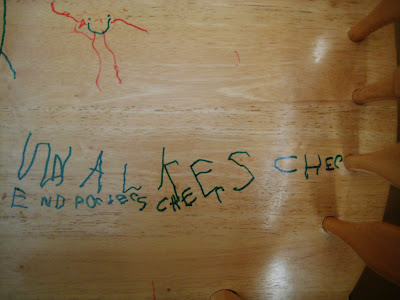 Lucky for me he picked the only permanent marker in the bunch to mark his territory.

Karli~So sorry! I wouldn't want to try to even fix that!! But excellent writing. Have a great day!

Oh no!!!
And yet you are SO calm to the point of this being so funny! : S I know. Not funny. Sorry.
Wish I knew how to help you get that off!
You rock for taking photos and recording for all history the wonderful effort made with this writing skills.

Freaking hilarious, Ryan and I are seriously laughing out loud, we had a similar experience today. Pretty good writing, and where do the guests sit?
Try spraying hairspray on it and that should take it off!
WOW! Still laughing!

I'm sorry, Karli, this is so funny and gave me the giggles. I'm sorry for the mess. You are awesome to document it for the future. You can use it later on when Porter has kids!
Try Mr. Clean Eraser, maybe that might work. I'm not to sure about permanent marker, but I know it works wonders on marks and walls, crayons, and penaten. So maybe?
Thanks for the giggle!

I was going to suggest a Magic Eraser, too! Abby colored on the wall two days ago and it came right off. Good luck and thanks for the laugh!

What makes this REALLY funny, and you REALLY smart, Karli, for not getting too upset, is that Porter thought he was doing the greatest thing ever--monogramming the chairs! Only the most elite have such luxury. My personal favorite is "Porters end Wakers cher sumtims"--gotta get those details right! Precision, that's what I say. And complete with artwork as well. Priceless.

OUCH! But oh so cute! Our girls "marked their territory" under our chairs, but not in such nice handwritting!

That is hilarious! Maybe your next project can be chair cushions. Just a thought ;-)

I was thinking you could make a "goldilocks and the three bears" book out of these photos. It could be so much fun :)