Lord of the Rings Party

Mike was in charge of the Young Men/ Young Women's Halloween party tonight and the kids decided that they wanted to do a Lord of the Rings themed party. I think it turned out great. They had trivia games, charades, pictionary, etc... Most of the kids dressed up like hobbits or elves and there were some great costumes!

I asked Mike if he needed any help with anything and he figured they'd be ok but said if I wanted to come to the party I could. Of course I wanted to go! My mom was so nice and took my boys (and carved pumpkins and had root beer floats!!!) so that I was able to go.

Late this afternoon I figured I had better get a costume to wear so I went to mom's huge costume box trying to find something. I was thinking a beautiful elf would do. Alas, I found nothing 'elfish' but I did fine a big black cape, a black robe and some black material. I did some quick calculating and this is what I came up with... 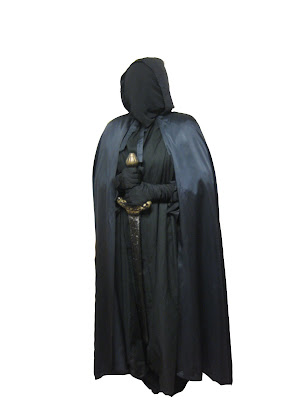 I had a blast wearing this costume. I didn't speak a single word all night and NOBODY had a clue who I was! I was in charge of the charades game and I had a ton of fun trying to communicate without speaking. And for those of you that are skeptical about me not talking at all for two hours... well, I even surprised myself! I fooled aunts, uncles, friends... everyone! Some people were sooooo convinced that they knew who I was but everyone guessed wrong. When they would come up and whisper something like, "Nice costume Sister Kochel", I just lifted my gloved hand to my mouth and pretended that I didn't want them to tell anyone that they had figured me out. One girl was even convinced I was her sister (who was sick at home by the way). The best was when they were so sure they had figured out who I was and then the very person that they had guessed would walk in with a different costume on and come up to me and try to figure out for themselves who I was!

I had a lot of fun and didn't want to reveal myself at the end of the night. The last few stragglers got to see me for who I really was and most were very surprised. It was a great time and the kids had a blast. Mike did a really good job but I'm pretty sure I haven't seen him so relieved to have something done with in quite a while.

Sounds like a lot of fun, and great costume.

you should wear that all the time Karli :) Since you just revealed your costume, I guess you can't wear it again.

T'would take a nice, sticky strip of duct tape to get me to not talk for 2 HOURS!