Porter recently got his first report card and while he met all the expectations for a kindergartner, he exceeded the expectations in two areas... READING and WRITING. I was super excited for him! His teacher (Mrs. Rancier), is now sending home books for him to read and sign off each school day. I think I am going to have to go in on Thursday however, and ask her for some that are a little more difficult. It takes him about 2 minutes to read them and he's done. I think he needs a little more of a challenge. Anyway, Mrs. Rancier suggested we practice writing at home more often, to allow him to progress even further. One of her suggestions was to let him write his letter to Santa all by himself. She suggested not worrying about the spelling but just to allow him to sound out the words phonetically. We did just that and this is his letter to Santa: 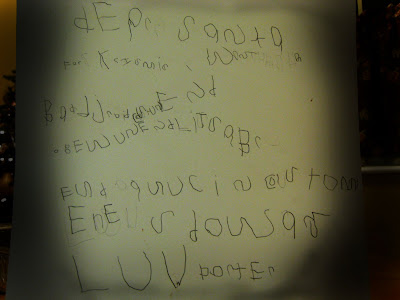 Here is what he wrote:

Pretty priceless, I hope you keep that letter. I think he did a great job, and it looks like he wants the same things as my boys!