The half-marathon was a huge success!!!

Things were a little crazy the couple of weeks leading up to the race but we managed to pull through and made it to Victoria.

Becky got injured and discovered she wouldn't be able to run the race with us, much to my dismay. She worked so hard to get us all ready and then had to miss out. Thanks for all your hard work Becky!

My lovely little kidney stone threatened to sideline me but all to no avail. Many of you thought I was crazy for running in this race with a kidney stone, and at about mile 11.5 I was agreeing with you, but I'm so glad that I did run it. All that hard work was not going to go to waste dang it!

We, (Tiffany, Jena, Amber and I), left Vanderhoof at 5:00 a.m. on Friday morning. I woke up bright and early despite the power outage that affected the entire town. I made sure to get everything ready the night before so I wouldn't be late to pick up the girls. All I needed to do was fill the van with gas and we'd be on our way. This proved a little difficult due to the power outage. Every building in town, including all the gas stations were shut down! We said a little prayer and hoped we could make it to Prince George on the little gas we had. The tank was on empty from Bednesti to Prince George) about 45 km, but we made it! :)

Then, on to Vancouver. The drive went quickly, thanks to three teenage girls and some great I-Pod music. We made great time, even with all the construction we had to drive through, and Tiffany even managed to brighten the day of a few construction workers!

Friday night we stayed with my brother Kyle, his gorgeous and super pregnant wife Mindy, and their awesome little guy Gavyn. They were great hosts and took us shopping a great mall in Vancouver. It was a lot of fun. Well, that is until we found out that one of the Ferry's we had to take from Vancouver to Victoria had broken down! We knew the lines for the Ferry's were already going to be crazy because of all the people going to the marathon, plus it was a holiday weekend. We figured out best bet would be to leave super early, get in line, and just wait our turn, hopefully getting on a ferry sometime that day.

So, Saturday was another early morning for us. We left Kyle and Mindy's house at 5:30 a.m. and drove straight to the Tswassan Bay Ferry terminal. And we got lucky. We actually made it on to the first ferry that left at 7:00 a.m. It was such a beautiful ride. We didn't see and whales, much to our dismay, but the scenery was amazing and it was a really fun ride. Amber, Tiffany and Jena kept me laughing the entire time and I wasn't the only one. I'm pretty sure Deck 6 was kept entertained for the 1 1/2 hour ride to Victoria due to those three ladies! 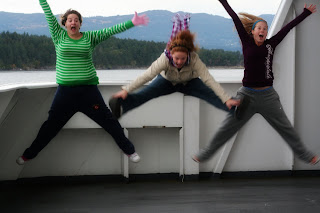 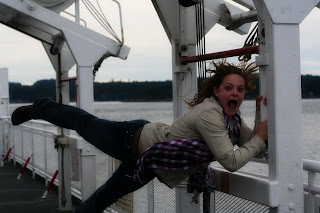 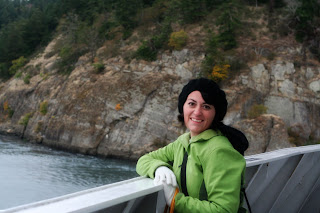 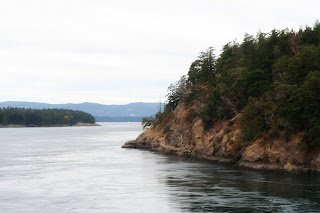 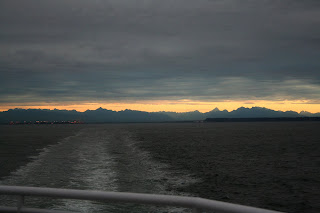 Once we got to Victoria we found out hotel then made our way to the Victoria Conference Centre to pick up our race packets. The energy was palpable. It was so exciting to see all these people who would be racing with us. We picked up our race bibs, shirts, and racing chips, then took a quick walk down to where the start and finish lines were. Victoria is beautiful! If you ever get a chance to go you should! 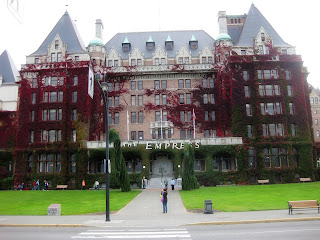 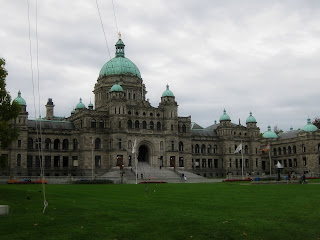 The rest of the day we relaxed, went to the mall, and basically tried to relax before the big day. That evening we met friends from the running club here in Vanderhoof and had dinner at the Spaghetti Factory. Had to load up on the carbs of course! :)

Bed came early that night. I think we were asleep by 8:30! It felt great.

We woke up early the next morning, full of energy and ready to go! It was so exciting to put on the race bibs and timing chips. Ummmm, was this really finally happening?!?

Our cab showed up and we got a ride to the start line. The cab driver talked a little about the race with us. He'd run it a few years earlier and told us what a great race it was and suggested that we enjoy the scenery while we ran. I had great intentions to do just that, but you know what? Scenery was just about the LAST thing on my mind during the race! :)

We made our way to the start line and did a quick warm up jog around the area. There were SOOOOO many people! It was awesome! 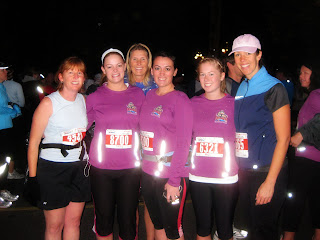 (some of our running club ladies)

I could go on and on but I'll make it quick. The race was awesome. It was hard. Really hard. With only a couple of miles left I really started hurting and wondering what I had gotten myself into. My back was KILLING me and I was pretty sure I might die. Well, at least be maimed for life! :) I had to walk for a while there at the end but I was determined to cross that finish line running, and I did it!

I can't even describe the feelings I had when I crossed that finish line. Emotions kinda ran wild and I had to really focus on not losing it. As we crossed the finish line they announced our names and home towns. It was fun to hear my name on the loud speaker. Right after we crossed they placed a finishers medal around our necks and I was so proud of myself. Still in enought pain that I was kinda not really lucid :) but proud of myself all the same. 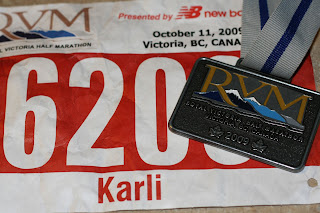 Tiffany, Jena, Monica and Ginger were waiting for me after the finish line. I was so happy to see them and it was great to hear them cheering for me when I finished. I was really touched to see them all there because some of them had finished nearly an hour earlier and they were still waiting for me. Thanks girls!

All in all, it was a wonderful experience. A really great accomplishment for me and I'm so happy I did it. During the race I questioned my sanity in running this far but I am so glad I did it and you know what? I'm gonna do it again. Hopefully without kidney stones next time!

A huge thank you to all those that believed in me and encouraged me through this entire thing. I really helped me out. A LOT! I couldn't have done it without my running buddies, my awesome trainer, my super hot husband, my supportive family, and many others. I hope some of you will join me on my next one. You won't regret it. Promise! 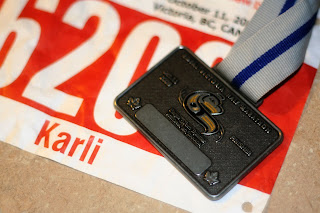 (if you look closely you can see the word 'finisher' on the medal!)

P.S. If this post makes no sense at all, I blame it on the morphine shot I had due to pain from the kidney stones. Still waiting on the darn thing to pass!

Awesome!Glad you finished; kidney stone or no kidney stone you're still a badass sister. Oh and nice photo pimpin it with beret..I told you its hot.

wow - how liberating, karli! thanks for sharing your experience. you had me tearing up a little. you are an inspiration to me - thanks for talking with me the other night.

Congratulations!! That is so awesome! Your story was great, sounds like an amazing experience!

I am impressed! Even without the kidney stone, it would have been amazing! Way to go! Wish I was closer I could run with you in the next one...or maybe that's my excuse for getting out of it. Nice job!

Yay for Karli. I am so Stoked to do my first 1/2. I get to start running again this week since my toe is all healed.
I can't wait.

WHAOOOOO!!!!! im so glad we both did it!!! i couldnt have done it without u!! im so glad i got to run with you! Im so proud of ya! AWESOME pics hahah! those construction workers will never forget us! haha..those kidney stones should really GO away! they take all your energy! Love ya Karli!

Karli you are amazing! I just wish a little would rub off on me.. ;)

Hi Karli! Congratulations on the 1/2 marathon! I ran my 1st 1/2 marathon in August and it was so fun (& challenging and hard)!! What an adventure you had!!

Way to go Karli!! I'm so proud of you! That is such a big accomplishment and I can't wait to hear about all your upcoming races. You rock! And you look smokin' hot too!!

Wow Karli!! I'm so proud of you. Thanks for sharing all of the pics and details. You're an amazing woman.

Good job little sister, I will be there next time, at least to cheer you on :)

I'm so impressed! I just hobbled my way through a 5k on Saturday! You are amazing! Hope you feel better soon!

Way to Go, Karli!
I'm so proud of you and the girls for fulfilling such a goal and what an accomplishment. Good for you girls. Looks like you all had tons of fun. Great Job!!

Thanks for sharing your amazing experience. What an accomplishment! Whew! I have to go have a rest now, I'm exhausted. Could an obscure, lil' aunt in lil' ol Manti be prouder? I don't think so. Way to be.